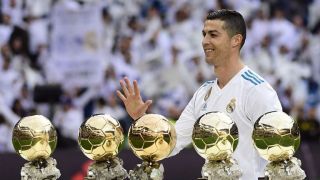 While he may struggle to land his sixth Ballon d’Or this year, Cristiano Ronaldo has shared his opinion on those in contention to win it this time round.

The Portuguese superstar is in contention for the award when the winner is announced on December 3 in Paris, but given the success of his rivals, it seems unlikely that he’ll add to his haul this time round.

With that in mind, he has given his opinion on who he believes could win it, and has suggested that it could be the end of the monopoly that he and Lionel Messi have had on the award in recent years.

“Of course I want to win, this sixth Ballon d’Or. It would be a lie to tell you the opposite,” he is quoted as saying by The Express. “So, let’s say Salah, Modric, (Antoine) Griezmann, (Raphael) Varane, (Kylian) Mbappe – the French in general because they are world champions.”

It’s difficult to disagree with that as given their World Cup success in Russia this past summer, the French players in particular will have a strong chance of winning the award.

However, the same could be said for Luka Modric, who guided Real Madrid to another Champions League success before captaining Croatia to their first ever World Cup final.

Nevertheless, Ronaldo had an intriguing comment too about how all those in contention who seemingly represent the next generation of superstars will still have to prove that they can match his and Messi’s longevity at the top to really consider themselves world class.

“But I will wait and see if all these players are still at the top in 10 years, like Messi and I have done, and like we continue to do.”

Clearly there is mutual respect between the two long-time rivals, but perhaps after his Real Madrid exit this past summer to join Juventus, Ronaldo is a little more forthcoming with showing it publicly as he evidently puts himself and the Argentine icon at a higher level than their rivals regardless of who wins the 2018 Ballon d’Or.