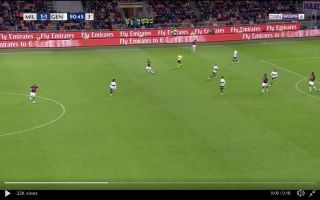 AC Milan defender Alessio Romagnoli made up for his earlier own goal against Genoa in spectacular fashion by scoring a dramatic stoppage-time winner to give Milan all three points.

Earlier in the second half a mistake from Tiemoue Bakayoko – who is currently on loan from Chelsea – led to Romagnoli turning the ball into his own net.

Romagnoli made up for his earlier misfortunes with a bizarre volley in the 91st minute after a long ball from Ignazio Abate was punched out to the edge of the box by the Genoa goalkeeper.

Check out a video of Romagnoli’s dramatic late winner which had shades of a Zlatan Ibrahimovic strike below:

ROMAGNOLI WHAT A GOAL IN THE 90TH MINUTE!!!
[via @TVACM] pic.twitter.com/3PgGzqyuQf

Romagnoli’s volley was truly magnificent, it appeared as though Romagnoli had an audacious swipe at lobbing the ball back into the box, the centre-back would never have imagined that his shot/cross would hit the back of the net.

Gennaro Gattuso will be over the moon with the fact that his struggling side have come away with three points thanks to a almighty stroke of luck.