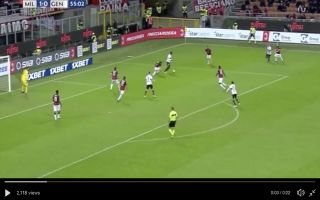 Chelsea’s Tiemoue Bakayoko, on loan at AC Milan this season seems to be having more moments to forget rather than remember in recent times.

In the 55th minute of Milan’s tie with Genoa, Bakayoko held onto the ball in his own box and as he moved closer to his goal he was dispossessed which lead to Genoa equalising against the Italian giants.

Genoa’s shot was turned into the Milan net after a deflection from Milan defender Alessio Romagnoli.

Fans will be scratching their heads to find a reason why Bakayoko would attempt to keep the ball in a situation where the team was under so much pressure.

Check out a video of Bakayoko’s error below:

What the hell was Bakayoko thinking?
[via @TVACM]pic.twitter.com/XHeJMKQAao

Genoa level it as Bakayoko loses possession in the box and they pounce #MilanGenoa pic.twitter.com/js5VzJZjYq

Things seem to keep going from bad to worse for Bakayoko earlier this month AC Milan manager Gennaro Gattuso even went as far to say that “One week is not enough to remove the defects of a player. I would have preferred to be managing older, more experienced club players.”