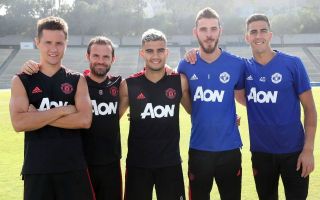 Manchester United goalkeeper David de Gea has reportedly been left surprised by comments made by Jose Mourinho over his future.

The Spain international’s name has dominated headlines again recently as it looks as though his long-term future could lie away from Old Trafford.

De Gea’s current contract with United expires at the end of this season, and while there is an option to extend that for an extra year, he doesn’t look close to extending beyond that, according to a recent report from the Telegraph.

Since then, Mourinho has also been quoted by Sky Sports as saying he was not confident the 27-year-old shot-stopper would renew with the Red Devils.

These comments, however, are said to have been met with surprise by De Gea and his representatives, according to Spanish publication Sport.

The report suggests De Gea is happy to extend for a further year and that he’s happy with life at United.

However, it is little surprise MUFC would ideally like to see more commitment from him soon as he’s undoubtedly been one of their most important players for around five years or more.

De Gea has out-performed other big names at the club like Paul Pogba, Alexis Sanchez and Romelu Lukaku, and is firmly up there as one of the top three players in the world in his position.