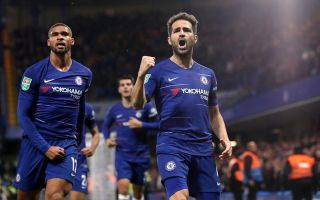 Chelsea midfielder Cesc Fabregas has been linked with a sensational switch to one of Chelsea’s rivals, the Spaniard’s contract at Stamford Bridge expires at the end of the season.

According to a report by The Sun, Fabregas is just 5/1 to return to Arsenal next summer. It is understood that Chelsea are not willing to open talks on a new deal until the new year.

A return to Arsenal could appeal to Fabregas, who made 212 appearances for the Gunners after coming through the academy before joining Barcelona in 2011.

The 31-year-old could also prefer staying in London rather than moving abroad in his twilight years despite the chance of earning more playing abroad.

The Sun also report that Fabregas will be expected to take a significant pay cut, Fabregas is currently one of Chelsea’s top earners on 160,000 a week.

Fabregas has fallen down the pecking order at Stamford Bridge.

It is unlikely that Fabregas will force his way into Maurizio Sarri’s side so a move away to secure first-team football could be the best option for the two-time Premier League champion.