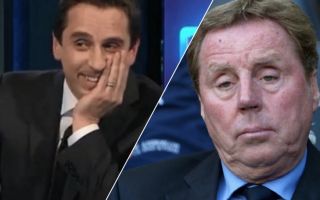 Gary Neville took his Twitter game to a completely new level this morning, as the Sky Sports pundit brutally trolled Harry Redknapp after he was slated by the former Spurs boss regarding his comments made about the north London club.

As per the Daily Mail, Neville said on Sky Sports’ ‘Monday Night Football’ between Spurs and Man City that Tottenham have been “spineless and soft” in the past, comments that didn’t go down too well with Redknapp.

As per the Mail, Redknapp then responded to Neville’s claims, saying that “I thought Gary’s comments were an absolute disgrace”, and that “when he managed Valencia they were the worst Valencia team probably not just in the last 30 years but in their history”

Redknapp also stated “I think he needs to do his homework before he comes out and makes comments like that”, words that seemed to have sparked a little something in Neville’s mind if his activity on Twitter is anything to go by.

The former Man United star took to the social media site on Friday morning to post a tweet comparing his record at Valencia to Redknapp’s time at both QPR and Birmingham City.

Neville has been somewhat known to be a bit of ‘Twitter King’ amongst football fans, and he is often found joking about on the website with both fans and players alike.

However, following this moment regarding Redknapp, it seems like Neville’s really stepped up his game, something we’re all for considering how funny this tweet is!

You can find the tweet above, and to be fair to Neville, his tweet does somewhat show that he does his homework, at least more than Redknapp has done in the past few years!