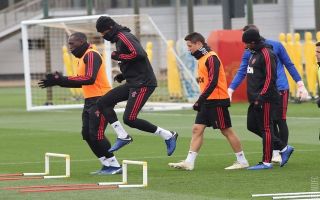 Manchester United midfielder Ander Herrera could be on the way out of Old Trafford in January in a cut-price move, the Spaniard is in the last year of his contract with the Red Devils.

According to a report from The Sun, United are willing to accept a knockdown price for the midfielder given the fact that talks over a new contract appear to be at a deadlock.

The report states that Manchester United would be willing to accept a bid for the 29-year-old in the region of £3m to £5m. This is some way off the £29m United parted with to bring Herrera to Old Trafford from Athletic Bilbao in the summer of 2014.

Despite the uncertainty surrounding his future Herrera seemed to be all smiles alongside compatriots Juan Mata and David De Gea when travelling with the United squad to Bournemouth.

The Sun also reported that Everton are one of the teams interested in signing Herrera, the signing could help push Everton towards their goals of qualifying for the Europa league.

A source at United told the Sun:

“There has already been a lot of interest in Ander from around Europe and England.

“There’s a growing feeling here that he is ready to walk away next summer and that’s something the club don’t want.

Herrera doesn’t seem to be part of Jose Mourinho’s plans at Old Trafford, the Spaniard has featured only 4 times this season – with 3 of those appearances coming off the bench.

“The club obviously want to avoid that particular scenario and are trying to compromise and get a deal done.

“He knows there’s interest in him but he has a young family and is settled in the area and likes living here.”

Herrera has made 114 appearances for United in the Premier League but it appears as though the central-midfielder doesn’t have a long-term future at the club after falling down the pecking order.