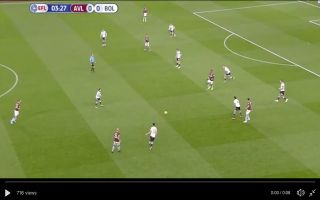 Chelsea’s Tammy Abraham – on loan at Aston Villa showcased some amazing skill and a great eye for a pass for Aston Villa when they faced off against Bolton.

In the 4th minute of the matchup Abraham received the ball with his back to goal from around 40 yards out, the 21-year-old fooled Bolton centre-back David Wheater with a great dummy and turn before splitting the defence with a pass to Grealish on his weaker left foot.

Grealish finished the move in style by rounding the Bolton goalkeeper before scoring.

Abraham joined Villa on loan for the season towards the end of the season on deadline day this summer.

Frontman Abraham has scored 4 goals in the Championship so far for the Villains but surprisingly it was his eye for a pass which impressed fans today.