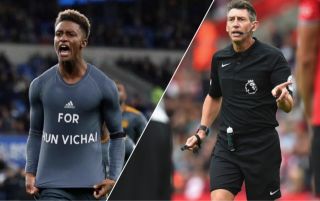 Football fans took to Twitter en masse this afternoon to slate referee Lee Probert, after the official booked Demarai Gray for a celebration related to the former chairman of Leicester City, Vichai Srivaddhanaprabha.

As the Foxes took the lead in the first second half through a fine finish from Gray, the England youngster took off his shirt to reveal a message dedicated to the club’s former owner that read “For Khun Vichai”, a touching moment for all those involved with the club.

Probert then decided to book Gray for this celebration as, by the laws of the game, it is against the rules, something that has angered a large majority of football fans.

Leicester City are surely going to be going through some very hard times at the moment with the death of their former chairman, and their situation wouldn’t have been helped by Probert’s actions here.

Albeit Probert’s actions were correct in terms of the rules of the game, it would’ve been nice for the official to show some heart and compassion and not book Gray for his touching celebration this afternoon, just for this one time.

Because of Probert’s decision, football fans everywhere took to Twitter to slate the official.

Here are a few select tweets from fans slating Probert for his decision making this afternoon.

Lee probert is a complete prick. Clearly doesn't have a heart or common sense.

Lee Probert is a disrespectful prick!

I know the rule is Gray should have been booked for taking his shirt off. But does Lee Probert really think anyone would care if he'd just let it go this one time. Prick.

Lee probert should be sacked the miserable cunt https://t.co/8CEcBUBKhl

Lee Probert has no heart. Hope he gets sacked

The referee in the Leicester game should be fired on the spot for issuing a yellow card to Gray after that goal. Totally classless card. Circumstances DO matter.

Away from the Premier League now, and you can watch Fiorentina vs Roma LIVE this evening by clicking THIS LINK here!