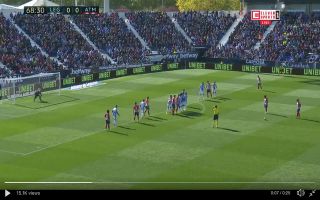 Griezmann handed Atletico the lead in the 69th minute with a wonderful free kick from far out which flew into the top corner leaving the Leganes keeper rooted to the spot.

Griezmann’s goal however was not enough to seal the win as Leganes responded in the 82nd minute through Guido Carrilo who put a stop to Atleti’s chance of going top of La Liga.

Check out a video of the spectacular free-kick courtesy of Eleven Sports UK:

Atleti could well be the only serious contender to Barcelona for the La Liga trophy this season with Real Madrid’s disastrous start to the season leaving them far behind in the title race.

Video: Barcelona’s Antoine Griezmann continues to excel for France with a vital goal against Bosnia