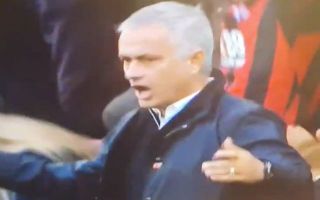 After his leaky Man Utd defence conceded first against Bournemouth on Saturday, it’s fair to say Jose Mourinho didn’t look impressed at all.

The Red Devils have been poor defensively all season, and it looked as though it could cost them again this weekend after Callum Wilson’s opening goal for the hosts.

Fortunately for United and Mourinho, they were able to mount a comeback and secure a 2-1 win, but having now conceded 18 goals in 11 Premier League games, there is still real reason for concern with the backline.

Having been carved open before Wilson converted, replays picked up Mourinho’s reaction to the goal and he certainly looked as though he was fuming with his side’s defending.

Further, as noted in the tweets below, many viewers believe that he said: “Of course, of course”, thus suggesting that he wasn’t surprised that his defence had been breached so easily again.

It remains to be seen if he can find the solution to make them tighter at the back, but for now, it looks as though his frustrations could continue and it could cost them in the hunt for trophies this year…

Shocking… Mourinho goes of course when we conceded. Poor from the players then #MUFC