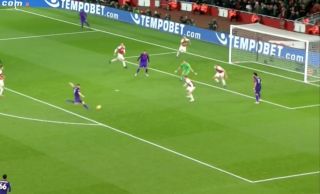 James Milner took advantage of a mistake from Arsenal goalkeeper Bernd Leno this evening to give Liverpool the lead in their clash vs the Gunners at the Emirates.

The opening goal of the game came in the 61st minute, after a cross from Mane was mistakenly pushed out by Leno, with the ball falling to Milner on the edge of the box, who hammered home to give the away side the lead.

It’d been a pretty even game up until Milner’s second half strike, however expect Arsenal to have a little more of the ball and attack even more often now following Milner’s goal, as they look to find a way back into the match.

Here’s a clip of Milner’s goal. What on earth was Leno doing there?