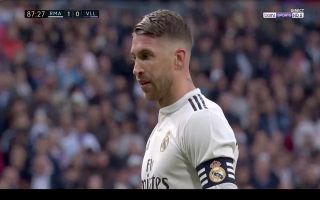 Los Blancos had an unfortunate own goal from Valladolid’s Kiko to thank for breaking the deadlock in a dull encounter in the 83rd minute.

Madrid extended their lead 5 minutes lead after Karim Benzema was brought drown in the box after tricking the Valladolid defender with a lovely sharp turn.

Ramos ran the length of the pitch from centre-back to take the penalty and remained cool calm and collected to chip the ball down the middle to seal the victory for Madrid.

Check out a video of Ramos’ cheeky penalty below:

Madrid have moved into 6th place in La Liga and they will need to continue their winning ways for the foreseeable future to make up for their disastrous start under Julen Lopetegui.

Lopetegui was given his marching order after Madrid were thrashed 5-1 in El Clasico.

On the note of Real Madrid here’s how you can watch Cristiano Ronaldo in action live for Juventus against Cagliari at 7.30pm for free either online or through the comfort of your TV.