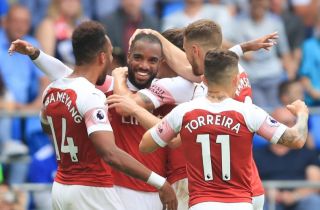 Adapting to a new country, league and culture at 19 is a daunting challenge for any player, but fortunately for Arsenal starlet Matteo Guendouzi, help is at hand.

The Frenchman was a surprise signing by Unai Emery after he took charge at the Emirates this past summer, although evidently the Spanish tactician saw something in the talented youngster during his spell at Paris Saint-Germain.

SEE MORE: Emery calls on Arsenal star to ‘do more’ and improve overall game after his display against Liverpool

Albeit there have been some issues with adapting to the Premier League, Guendouzi has already made 10 appearances so far this season, and so he seemingly has won the trust and belief of his coach as he looks to make his mark in his debut campaign in England.

In order to help him feel as settled as possible, Lacazette has revealed his own leadership qualities by revealing that he and his teammates have been crucial in helping the youngster settle in north London and adapt not only on the pitch, but also off it too in terms of knowing how to cope with the new level of pressure.

“I really enjoy playing in this team and with this group of players,” he is quoted as saying by the Metro. “Matteo came over from France in the summer and we spend a lot of time with him.

“He’s young and maybe when he signed he didn’t know too much about the professional life at a big club, so we had to help him with some things. It’s nice because he is happy to learn and we always have fun together.”

It seems to be working for all involved as Arsenal have made a positive start to the season after a shaky first two games for Emery, as they now sit just outside the top four in the Premier League and have impressed both in the League Cup and the Europa League.

Guendouzi will undoubtedly get more opportunities as the year goes on with Arsenal looking to compete on various fronts, and with the help of more senior players like his compatriot Lacazette, who had to adapt and settle himself in London not so long ago, he seemingly has the right people around him to make his stint with the Gunners a successful one.