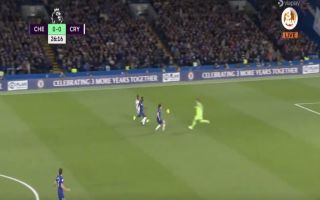 The Blues secured a 3-1 Premier League win at Stamford Bridge on Sunday, thanks to a brace from Alvaro Morata and a 70th-minute Pedro strike.

Maurizio Sarri’s men moved into the top two after 11 matches with the victory, further emphasising their credentials as title contenders this season.

Despite a relatively quiet afternoon in terms of having to save shots, Kepa was praised by Chelsea fans on Twitter for his sublime passing skills, which he displayed in one sumptuous moment in particular against the Eagles.

The Spanish ‘keeper came charging out of his area to meet a bouncing through ball on the half volley, firing it perfectly into the feet of his teammate in the opposition’s half.

Check out the brilliant pass under pressure below, along with some fan reaction:

That interception and pass was a thing of beauty Swepa Kepa! ?

That pass from kepa ! #CHECRY

Another sublime Kepa moment that puts mid table @thibautcourtois to shame, charges out of goal yet plays a brilliant pass to put us on the counter attack @ChelseaFC

Kepa the only keeper in the league who can charge out and make an inch perfect pass like that.

That pass from @kepa_46 though ? under pressure yet finds Azpi on the wing with pinpoint accuracy ? #gkunion

As if Kepa just rushed out and drilled a Gerrard like pass to Pedro under pressure from his own CB and Zaha.