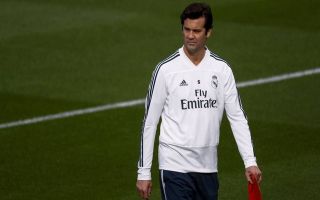 Real Madrid boss Santiago Solari will be hoping to make it three consecutive wins to start his stint in charge when his side face Viktoria Plzen in the Champions League on Wednesday night.

The interim coach has already picked up victories over Melilla and Real Valladolid since replacing Julen Lopetegui at the helm at the Bernabeu last week, with his side scoring six goals and conceding none.

In turn, he has certainly made a positive start to life as coach, and he’ll be hoping to extend that run against Plzen in midweek as the reigning European champions look to solidify their place at the top of Group G.

To do that, Solari has named youngster Vinicius Jr in his 20-man squad, as seen in the club’s tweet, and the fans below have all reacted positively to the starlet getting a potential opportunity to impress on the European stage.

The 18-year-old has made four appearances for the senior side so far this season, scoring one goal while providing two assists.

In turn, he has arguably made a strong argument to get more minutes, particularly if the likes of Marco Asensio, Gareth Bale and others continue to struggle.

Time will tell if Solari hands him a starting berth or if he has to be content with a place on the bench, but the Argentine coach does have problems elsewhere as Raphael Varane, Dani Carvajal and Mariano Diaz all miss out due to injury.

As a result, he’ll have to find the solutions to deal with those absences as he’ll want to continue to build momentum heading into the weekend clash with Celta Vigo on Sunday night.

Brilliant to see that Solari isn’t ignoring Odriozola and Vinicius Jr. Prayers for our young guns