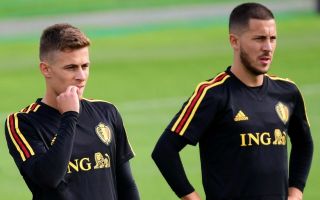 The brother of Eden Hazard has sent the Chelsea star a pretty big clue over what he thinks he should do regarding a potential transfer away from Stamford Bridge to Real Madrid.

Borussia Monchengladbach star Thorgan Hazard has been discussing his older brother’s situation, and says he expects he’ll make a decision over his future at the end of the season.

However, the 25-year-old has also suggested Eden made the right decision to stay with Chelsea this summer amid links with Madrid and that he’d be right to do so again.

Thorgan believes Los Blancos are going through a difficult transition period, while CFC currently look very strong – which is certainly hard to argue with, with Maurizio Sarri proving a revelation since replacing Antonio Conte as manager in the summer.

CFC man Hazard has certainly felt the benefits of that, hitting some of the finest form of his career and looking far happier than he did for much of last season.

‘I think Eden will see what happens at the end of the season,’ Thorgan told HLN, as translated by Goal.

‘I know him. He’s not thinking about a move right now.

‘He will give everything for Chelsea. He doesn’t want a clash with his club either. If he ever leaves, he will play it correctly.’

He added: ‘Eden made the right decision to stay at Chelsea. Chelsea weren’t keen on selling him and he had a strong start of the season.

‘Real Madrid are in a complex period. They sacked their manager, key players left. They have to rebuild.’