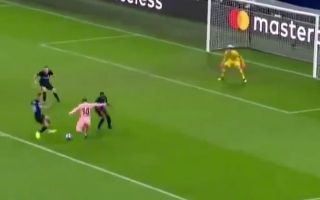 Malcom came off the bench and made an instant impact for Barcelona as he broke the deadlock in their Champions League clash with Inter.

Just minutes after being introduced by coach Ernesto Valverde, the Brazilian starlet proved a threat with his directness and whipped his finish into the back of the net to beat Samir Handanovic, as seen in the video below.

Having created countless chances during the game, the visitors would have been relieved to have found a breakthrough eventually, with victory securing their place at the top of Group B.

However, they were pegged back almost immediately as Mauro Icardi produced an instant response for the Nerazzurri, capitalising on some poor defending to drag his side level.

Nevertheless, for Malcom it was an emotional moment as he has struggled to make his mark so far this season and he’ll certainly hope his first goal for the Catalan giants will help him kick on and become a more prominent figure in the weeks and months ahead.

Malcom in the middle of Asamoah and Perisic, scores this amazing goal!pic.twitter.com/kLCafRANTR

I’M SO HAPPY FOR MALCOM!!! I KNOW HOW MUCH THAT GOAL MEANT TO HIM!! HOW MUCH CONFIDENCE HE JUST GAINED ??
pic.twitter.com/w3ZA9sDLdC