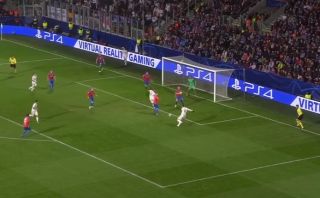 Real Madrid are strolling to victory in this first half against Viktoria Plzen, with Gareth Bale’s goal the latest in this rout in the Champions League.

The Wales international did superbly in this move to adjust himself and find an accurate finish to squeeze in between a small gap between defenders and the goalkeeper.

Bale pulled the finish off to perfection as his neat shot found the corner and made it 4-0 to Santiago Solari’s side.