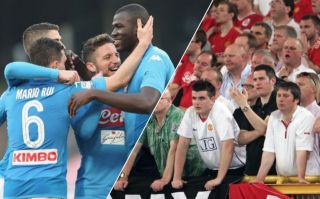 Man United fans have been taking to Twitter recently to call for the club to splash the cash and bring Napoli and Senegal star Kalioud Koulibaly to Old Trafford.

The defender was in action against PSG in the Champions League last night, and his performance against the French giants seemed to catch the eye of quite a few keen-eyed United supporters.

The Senegalese international was brilliant against Neymar, Mbappe and Co on Tuesday, as Carlo Ancelotti’s side were held by PSG to a 1-1 draw at home, a result that put them atop of their Champions League group.

United fans were quick to notice this, and some even took to Twitter to claim that the club should sign the 27-year-old, something the Red Devils should probably take into account give how good Koulibaly actually is.

The defender managed to silence Mbappe, Neymar and Cavani for the entire match on Tuesday, as all three seemed to struggled to get past Koulibaly and his Napoli teammates numerous times throughout the match.

United have had some defensive problems so far this season, and signing Koulibaly could be just the ticket to solving these in the near future.

After Tuesday night’s action, it seems like these United supporters definitely know who they want the club to sign in the near future if these tweets are anything to go by….

Would love united to throw £100m each on

Time to sell bailly to Napoli, add some £85m to it and get koulibaly

Give Napoli a blank cheque for Koulibaly.

United need to break the bank and sign Koulibaly/Skriniar and Milenkovic. Would add Icardi to that list but not sure if he would leave Inter for us. Ideally also sign Neves and Ndidi.

I would love to see Kalidou Koulibaly at United what a elite player!!

Koulibaly has been class today. Would be the perfect cb for united to sign, a pairing of him and Lindelof could be the answer to our defensive problems.

I’d break the bank for #Koulibaly if I was United. What a player he is. #MUFC

Manchester united should just give Napoli 70M for Koulibaly..
He's it.

United should just throw loads of money at Koulibaly from Napoli. Fucking machine!

Koulibaly is a top 3 centre back and I’d pay whatever it takes to bring him to United, won’t happen but he’s elite