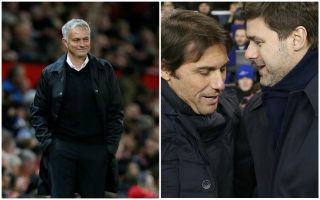 Tottenham manager Mauricio Pochettino has reportedly rejected an offer from Manchester United as he prefers to wait until the summer to decide his future.

According to Don Balon, the Argentine has also turned down a big-money proposal from Real Madrid as well, leaving them in a difficult situation after recently sacking Julen Lopetegui.

Pochettino is undoubtedly one of the finest managers in the world right now after doing a sterling job with Tottenham in the last few years.

Despite limited transfer spending, the former Southampton boss has worked wonders to improve a number of young players like Harry Kane, Dele Alli and Eric Dier, turning Spurs into one of the most solid and consistent teams in the country.

One imagines Pochettino could do great work with more resources at clubs like Manchester United or Real Madrid, but Don Balon claim he’s keen to continue with his project in north London for the time being.

If big sides want to snap Pochettino up it will have to wait until the end of the season, it would seem, but that’s not much good for Madrid after installing the inexperienced Santiago Solari as interim manager.