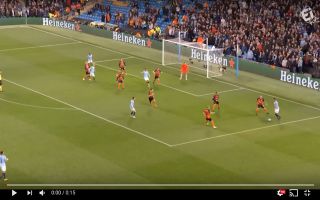 City summer signing Riyad Mahrez tricked his way past two helpless Shaktar defenders before firing in a low cross with his right foot across goal, Silva was on hand to tap in and give the Citizens the lead.

Check out a video of El Mago’s goal below:

Manchester City are looking to finally make the impression they have been longing for in recent years in this season’s Champions League.

Manchester City to sign Brazilian wonderkid; will report next year to the Premier League