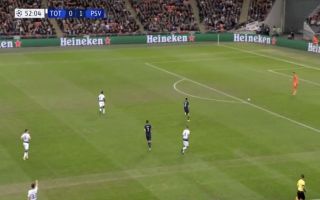 Spurs won 2-1 at Wembley against PSV Eindhoven on Tuesday night to pick up their first three points in Europe this term and revive their hopes of qualifying for the next round of the competition.

Inter Milan and Barcelona played out a 1-1 draw at the San Siro on the same night, which means Mauricio Pochettino’s men are now just three points behind the Italians in Group B.

Two late Harry Kane goals cancelled out Luuk De Jong’s early strike to secure victory for Spurs, but it was Gazzaniga between the sticks who earned unlikely praise for a delightful moment of magic when receiving the ball in his own box.

The Argentine shot-stopper collected a back pass from Toby Alderweireld under pressure from Lozano and faked to kick the ball long, before producing a Cruyff turn to bamboozle the PSV striker and turn the other way.

Check out the skill below along with some fan reaction via Twitter:

Paulo Gazzaniga on behalf of us all at @LastWordOnSpurs we absolutely love you.

The goalkeeper still has 100% winning record in every single game he has played for Tottenham Hotspur, again making crucial saves at crucial times for us.

I tell you, it’s Gazza-ninja. Could you see Lloris doing that?

Gazzaniga when Poch tells the team not to take unnecessary risks pic.twitter.com/PpUV9tvTt2