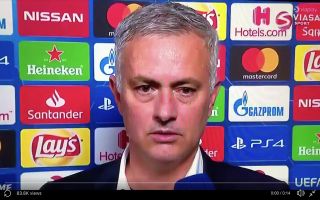 Manchester United manager Jose Mourinho used his post-match interview as the perfect opportunity to get one over on the FA who earlier announced that they were planning to appeal the decision to not charge the Portuguese with improper conduct according to Sky Sports.

The FA appealing against the Mourinho decision is a joke. Who has signed that off?

Check out Mourinho’s hilarious dig towards the FA below:

Mourinho is understandably on cloud nine after United’s late comeback against Juventus and for once Mourinho’s explosive post-match antics aren’t targeted towards one of his own players.