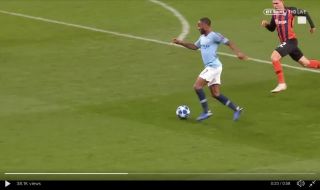 Manchester City were awarded a penalty that was described as the ‘worst penalty decision in history’ after Raheem Sterling tripped over the turf against Shaktar.

Despite neither Sterling or Pep Guardiola calling for a penalty the referees went on to award City with the penalty and fans are scratching their heads at how four match officials couldn’t see that Sterling innocently tripped over the turf.

Check out a video of Sterling’s slip which led to the penalty below:

THAT IS A SHOCKER!

Raheem Sterling trips on the turf, unopposed and the referee awards a penalty kick. ? pic.twitter.com/vdCDsw8Qsf

Pep Guardiola was livid on the touchlines and his pleas with the 4th official to overturn the penalty were avoided.