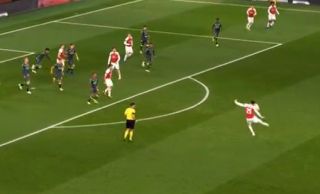 And yes, before you mention it, we also forgot this guy was still at Arsenal or indeed still playing football.

And yet here he is, in 2018, out there at the Emirates Stadium in a red and white kit producing banter moments that only he can.

Watch the video below as Jenkinson attempts a volley as the ball drops invitingly to him on the edge of the box, only for him to slice it horribly.

Either that, or it was a brilliantly disguised no-look pass. You decide.

Decent attempt at a volley from Jenkinson… pic.twitter.com/RFFZQdvPq7