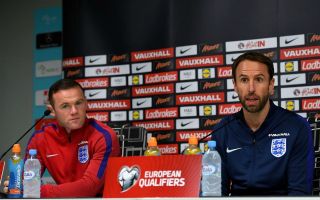 England manager Gareth Southgate has spoken out on his decision to involve Wayne Rooney in his squad for the upcoming friendly against the USA.

The former Manchester United star, currently playing in the MLS with DC United, is set for a surprise return to the international fold, and Southgate has explained why he felt it fitting to have a farewell moment for one of the country’s finest ever players.

Southgate also insisted Rooney’s appearance would only be a brief cameo one from the bench, though he would take the captain’s armband upon entering the field, according to the Sun.

‘I understand it has caused a lot of debate. Some are not happy about it and some are happy,’ Southgate is quoted by the Sun.

‘I have been in the unfortunate position to leave him out of the squad but I am pleased to honour him.

‘I think he’s earned the right to that cap over a period of over 10 years, six major tournaments and being our record goalscorer.

‘It is an opportunity to pay tribute to what he has achieved.’

The 33-year-old had a long and successful career with the Three Lions, becoming their all-time leading scorer and representing them in a number of major tournaments.

Still, there’s no question Rooney is somewhat past his best now and Southgate recently made the decision to leave him out of his plans.

This worked out well for England as a fresh young side performed well beyond expectation at this summer’s World Cup, reaching the semi-finals of the competition for the first time in 28 years.