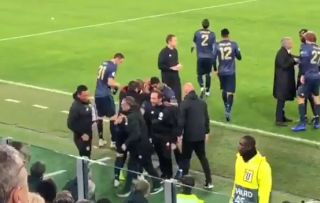 The Red Devils came from behind late on to earn a memorable victory in Turin, with Mata scoring late on and an even later own goal giving the visitors the win despite Cristiano Ronaldo’s opener.

Watch the video below as the players immediately run over to the touch line to celebrate the goal, though Mourinho seems to remain relatively calm and focused on passing on instructions.

As you can see in the clip, the Portuguese tactician seems to deliberately seek out two players – Paul Pogba and Marouane Fellaini – to give them a few words of advice, presumably on how to approach the closing stages tactically.

A superb view from the stands for Mata's goal. What a strike. ???

Notice how Jose immediately goes up to Fellaini and Pogba to hand out instructions amid the celebrations. [@utdxtra] pic.twitter.com/mpXUyzsehF

It isn’t totally clear if he simply tried to get the attention of whoever wasn’t involved in the celebrations or if he specifically wanted to talk to those two, but it does seem from the footage that he’s waiting for them.

Whatever Mourinho said last night certainly worked anyway, with the 55-year-old seeming to finally strike a chord with this group of players with some much-improved recent results.