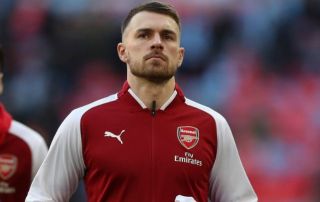 Aaron Ramsey looks set to become a free agent at the end of the season, and a new offer is reportedly forthcoming after he leaves Arsenal.

The Welshman will see his current deal at the Emirates expire in the summer, and having publicly revealed that the club have withdrawn their offer of a renewal, he looks set to move on.

With that in mind, the 27-year-old surely won’t be short of options given his quality and influence at Arsenal over the years, and Goal.com now suggest that there is interest from the Chinese Super League which could offer him a lucrative deal.

However, it’s suggested that given he and wife Colleen have just welcomed twins into the world, they could prioritise and prefer staying in England to avoid the upheaval and disruption a move elsewhere would cause and so Chelsea are specifically mentioned as a possible front-runner with that in mind.

It still seems like a questionable decision from Arsenal to let him leave, and perhaps it could still change in the coming months.

Nevertheless, with Ramsey able to speak to other clubs from January onwards, it remains to be if a big-money contract offer from China could sway him and his family to try a new challenge and adventure in that part of the world.

Or a stay in London with Chelsea being linked could be the more appealing option at this stage in his life, while the likes of AC Milan and Juventus have also been heavily linked in recent months.

Arsenal could bring popular former player back in swap transfer