Everton striker Richarlison is a doubt for Sunday’s Premier League game against Chelsea after missing a training session on Thursday.

The Brazilian arrived at Goodison Park during the summer transfer window from Watford and has hit the ground running at the start of the season, scoring six goals in nine matches.

Toffees boss Marco Silva has opted to use the 21-year-old as a centre-forward over the first few months of the campaign and he hasn’t disappointed, most recently netting a brace against Brighton during a 3-1 win last Saturday.

Next up for Everton is a tough trip to Stamford Bridge this weekend, where they will face a Blues side flying high at the top of the table in joint second, just two points behind leaders Manchester City.

Chelsea could be handed a huge boost ahead of the clash as according to Silva, Richarlison is a doubt for the clash after sustaining an injury and only managed to participate in light training on Friday after sitting out Thursday’s session. 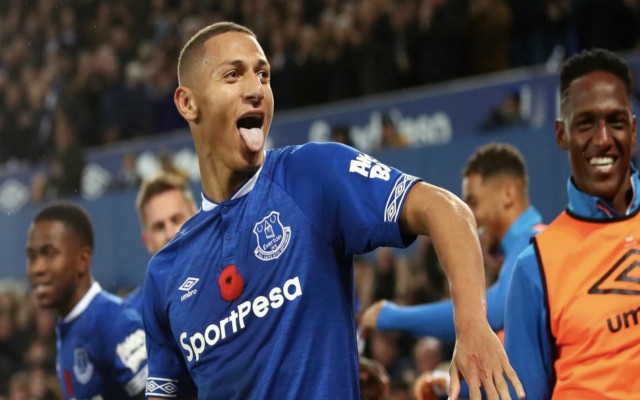 “He is in doubt for the match,” Silva told Sky Sports. “Let’s see how he will react after the individual work he did this morning.”

“We know he’s important for us as a striker and as a winger.

“If he’s not fit there’s good options for other players in his position. It’s football. The players waiting for their chance have all my confidence.”
The former Watford attacker has been arguably Everton’s standout player over the last few months and a vital figure during the team’s latest three-match winning run, but Silva does have other options at his disposal, such as Dominic Calvert-Lewin, Ademola Lookman and Cenk Tosun.
Chelsea will be overwhelming favourites to win at home and extend their unbeaten run under Italian boss Maurizio Sarri, particularly if Richarlison isn’t lining up against them to cause problems for the back four with his pace, skill and audacity in advanced positions.
Chelsea transfer target’s agent hints at “hope” of getting him a move
Video: Samuel Eto’o appears to knee fan in the head in shocking brawl at World Cup in Qatar
Exclusive: Cristiano Ronaldo transfer could be a “good idea” for Chelsea, but unlikely – Fabrizio Romano
More Stories Ademola Lookman Cenk Tosun Dominic Calvert-Lewin Marco Silva Maurizio Sarri Richarlison
AFCB
Arsenal
A. Villa
Brentford
Brighton
Chelsea
CPFC
Everton
Fulham
Leeds
Leicester
Liverpool
MCFC
MUFC
Newcastle
N Forest
Saints
Spurs
W. Ham
Wolves