Manchester City midfielder Raheem Sterling has put pen to paper on a new deal at the club, which will keep him at the Etihad until 2023.

The 23-year-old has been in sensational form for the Premier League champions at the start of the season, scoring seven goals in 14 matches across all competitions and turning defences inside out with his intelligent runs in behind.

Pep Guardiola’s men are top of the table once again, two points clear of Chelsea and Liverpool, with a huge clash against Manchester United up next on Sunday at the Etihad.

Ahead of the derby, the club has announced that Sterling has signed a new three-year contract extension, which will see his wages increase from £120,000 a week to £300,000, making him the highest paid English player in the league, according to the Daily Mail.

Man United’s Alexis Sanchez is now the only player in England on a larger pay packet, as this new deal clearly reflects the faith and confidence that Guardiola has in the diminutive winger.

Sterling’s original contract was due to expire at the end of next season, but now there is no doubt about where his future lies and City fans can surely now look forward to more matchwinning moments from the ever-improving winger for years to come. 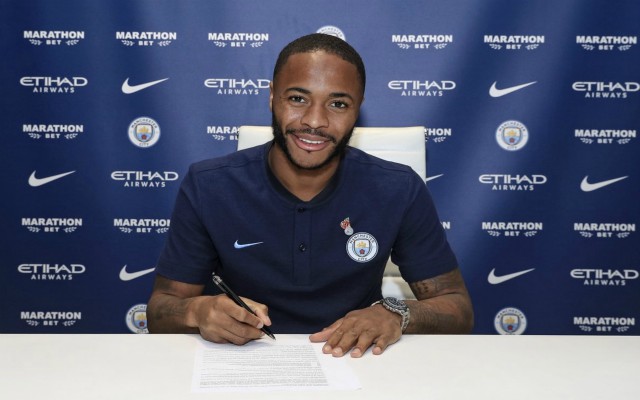 The England international expressed his joy after signing the new agreement on Friday, as the Daily Mail reports.

“I’m delighted to sign – my development here has been incredible,” Sterling beamed. “I felt from the minute I got here it was the right choice for me. It’s really paid off for me and I’m really grateful.

“Every season you come in you want to do better than your previous season. You want to try and develop and get better.

“With the facilities we’ve got here there’s no reason not to. With the coaching staff and the players we have in this team it’s the perfect environment to develop and get better.”

Man City’s sporting director Txiki Begiristain also added his congratulations to the club’s superstar, highlighting how much progress he has made over the last two years, as he told reporters: “This is a significant moment for the club.

“Raheem has improved dramatically in the past two seasons and is now one of the Premier League’s best-attacking players. His statistics tell their own story.

“He’s quick, strong and excellent in front of goal – everything a modern-day forward needs to excel.

“We’re all delighted he has committed his future to City.”