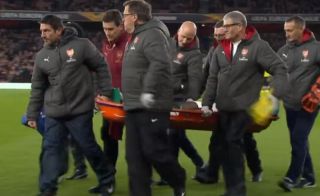 Arsenal boss Unai Emery has sent Danny Welbeck a message on Twitter after his striker suffered a serious injury in the Europa League clash with Sporting on Thursday night.

As noted by BBC Sport, the 27-year-old was stretchered off in the goalless draw at the Emirates with Emery confirming that it was most likely a break in the ankle.

In turn, it’s likely that Welbeck will now be sidelined for a significant period of time, and it will be a bitterly disappointing blow for him given his injury history.

Nevertheless, as he has shown before, he’ll work hard to come back fit and healthy in the coming months after surgery, and he’ll undoubtedly have the support of those around him at the club to help him through the recovery and rehabilitation phase.

As seen in Emery’s tweet below, he has essentially suggested that his players will go out against Wolves this weekend with the intention of winning the game for their injured teammate, and the Spanish tactician has sent his best wishes to the England international while likely doing the same in private too.

It’s a classy gesture from the Arsenal boss who will hope to have Welbeck back either at the end of the season or perhaps next year, but the long road to recovery will start soon and clearly he’ll be there to offer support and help him through the process.

One more big reason to fight and win next Sunday. All the @Arsenal with you. Hope to see your smile and energy soon, Danny! pic.twitter.com/ycjQ4YIZ5L