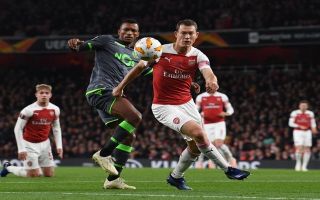 Arsenal right-back Stephan Lichsteiner added some excitement during Arsenal’s goalless draw against Sporting last night with a lovely gesture to one Arsenal youngster.

In the 69th minute of the match Lichsteiner tied the shoelaces of Gunners hot prospect Emile Smith-Rowe, it seemed as though the 18-year-0ld missed the lesson on tying your shoelaces when he was honing his skills as a young kid.

The whole ordeal was bizarre to say the least but Arsenal fans love how nice Lichsteiner seems to be to his teammates.

"I know he's young but that's ridiculous isn't it."

Check out reaction to Lichsteiner tying the youngster’s laces below:

Rather funny sight as the 34-year-old Lichtsteiner bends down to tie the 18-year-old Smith Rowe's shoelaces…. #ARSSPO

Lichtsteiner doing Emile Smith Rowe’s laces up. Good to see a grandad looking after his grandchildren.

This comes only days after Lichsteiner took to the touchline to inspire his teammates during Arsenal’s 1-1 draw with Liverpool:

Stephan Lichtsteiner on the touchline pushing the players on just after we equalised. This is why we bought him. This is the type of player we need in the dressing room. Brilliant attitude and will always put the team before himself. What a man. pic.twitter.com/N6Oc3ryfXJ

Lichsteiner has certainly lifted the dressing room since his move to Arsenal from Juventus this summer, Lichsteiner looks to have the makings of a very good coach once he finishes his playing career.

Unfortunately last night’s goalless draw was overshadowed by the serious injury which saw Danny Welbeck stretchered off and needing oxygen. Veteran Lichsteiner was also forced off with an injury.