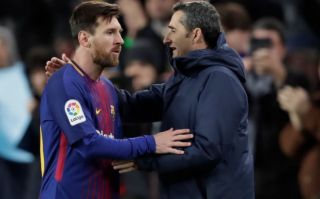 Barcelona face Real Betis on Sunday and coach Ernesto Valverde has been handed a major double boost having confirmed his squad.

Both Lionel Messi and Samuel Umtiti return to the fold after their injury setbacks, and given the influence that the pair have at either end of the pitch, it will be music to the ears of Barca fans to see them back in the mix.

Whether or not they’re fit enough to start or perhaps come off the bench remains to be seen, but for now it will be a welcome boost that they’re back involved and pushing for a return to action, albeit one player is expected to drop out given Valverde has named a 19-man squad when the limit is 18.

The Catalan giants will be looking to consolidate their place at the top of the La Liga table with a win ahead of the international break, while also looking to put the disappointment of failing to hold on to their lead against Inter in midweek behind them.

Having Umtiti back to shore things up defensively will certainly help, while Messi’s tallies of 12 goals and six assists in just 12 games so far this season says everything about the impact that the 31-year-old could have this weekend if he features.

Betis impressed in the first half against AC Milan in their Europa League meeting on Thursday and given their possession-based game, it sets up an intriguing and entertaining clash between the two sides at the Nou Camp.

However, one player who won’t take part for the hosts in Ousmane Dembele, as he has been left out of the squad by Valverde due to a technical decision, as per Spanish football expert Guillem Balague in his tweet below.

It comes after some controversy over his reasoning behind missing training this week, and so it’s unclear at this stage as to whether his illness or suggested lack of professionalism is the main reason behind the snub.

The king is back?

Messi and Umtiti back to the squad vs Betis (but one might still be left out as 19 have been called up). Dembele, having ‘forgot’ to tell the club he couldn’t make training on Thursday because of ‘gastroenteritis’ he is left out -technical decision