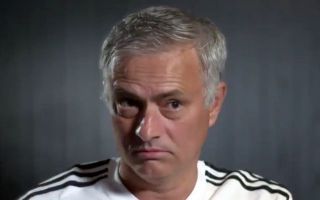 As he continues to struggle to establish himself in the Man Utd starting line-up, Matteo Darmian will reportedly be allowed to leave in January.

The 28-year-old has made just one appearance so far this season as he continues to struggle to push his way up the pecking order at Old Trafford.

With Luke Shaw, Antonio Valencia and Diogo Dalot ahead of him, it doesn’t look as though his situation will change any time soon, and so from Darmian’s perspective, an exit surely makes most sense.

In turn, according to The Sun, although Jose Mourinho benefits from having the Italian international available as defensive depth, it’s claimed that he won’t stand in his way if he wishes to move on in January with both Inter and Roma specifically mentioned as interested parties.

Having impressed for Torino prior to his move to Manchester, Darmian was a regular in the Italy squad not so long ago and so a return to Serie A to play regularly could be the perfect solution to get himself back on Roberto Mancini’s radar.

From Roma’s perspective, Aleksandar Kolarov isn’t getting any younger and so the left flank is an issue, while Alessandro Florenzi continues to be deployed at right-back at times which isn’t his natural position.

With that in mind, the capital club could certainly do with reinforcements in that department while with Inter returning to the Champions League this season, Luciano Spalletti could be eyeing defensive quality and depth himself to ensure that his side can compete on various fronts.

With that in mind, although United could be losing key depth, an exit for Darmain seems to make sense for most of the parties concerned.