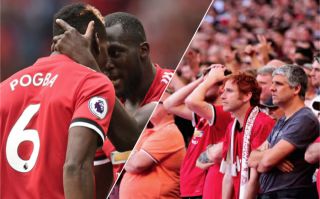 Man United fans received some injury news just hours before their clash against fierce rivals Man City tomorrow afternoon, and it didn’t seem to fill some of them with any confidence at all.

It was announced by journalist Samuel Luckhurst on Twitter than Romelu Lukaku is fit and in the club’s squad for tomorrow’s clash.

Whilst midfield superstar Paul Pogba didn’t arrive with the rest of the club’s squad to the team hotel on Saturday night.

Romelu Lukaku fit and back in the United squad for City. Paul Pogba didn’t arrive with the squad at The Lowry. #mufc

This news will come as bad news to most United fans, as despite their form so far this season, both Lukaku and Pogba are two of the best players that the club have, and them playing a part tomorrow will be key to helping the Red Devils overcome Pep Guardiola’s side.

City are yet to lost in the league this season, and it definitely looks like Jose Mourinho’s side are going to need all the hep they can get if they are to beat the league leaders at the Etihad stadium on Sunday.

Following this news, a select few United fans took to Twitter to make known their feelings about the news regarding both Pogba and Lukaku, and they weren’t best pleased by the looks of it!

In all honest, we can’t imagine why…

Anxious times. Lukaku back and no pogba. This is nerve wrecking.

lukaku in,pogba out. A nightmare

This update is worrying!!