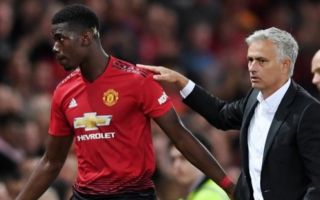 Man United will have Romelu Lukaku in the squad for their clash against rivals Manchester City tomorrow, whilst the siutation regarding Paul Pogba has taken another turn after he didn’t turn up at the team’s hotel with the rest of the United squad.

As per journalist Samuel Luckhurst on Twitter, the Belgian forward is ‘fit’ and is in the club’s squad to take on for their first Manchester derby of the season tomorrow at the Etihad stadium.

Luckhurst also states that Pogba wasn’t with his teammates as they arrived at the Lowry hotel, something that has only made the saga surrounding the Frenchman go on even further.

Romelu Lukaku fit and back in the United squad for City. Paul Pogba didn’t arrive with the squad at The Lowry. #mufc

It was originally reported that Pogba missed United’s training on Friday due to injury, and that he was a doubt for Sunday’s clash.

It was then stated that the midfielder was expected to be fit for United’s game on Sunday afternoon.

With Luckhurst now reporting that Pogba didn’t arrive with the rest of United’s squad at theeir team hotel just hours before kick off, it remains to be seen whether the midfielder will play a part for Jose Mourinho’s side tomorrow.

United fans are surely going to be hoping that Pogba plays on Sunday, as the French international is one of the best players that the club has, and his influence on the team is second-to-none.

City has looked almost unstoppable this season, and it’s going to take something special from United if they are to hand their local rivals their first league defeat of the campaign.

And Pogba might just be the man they look to to provide that, but only if he manages to play a part in tomorrow’s tie.

As well as United and City, some of Spain’s biggest clubs are also playing tomorrow, and here’s how you can watch them play live!

You can watch Barcelona take on Real Betis tomrrow by clicking THIS link here!

Or alternatively, you can catch Real Madrid play Celta Vigo by clicking THIS link here!