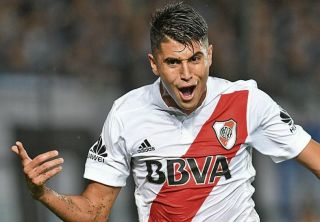 Real Madrid are reportedly closing in on the signing of River Plate ace Exequiel Palacios, and they’ve received more positive news in their pursuit.

According to AS earlier this week, it had been claimed that the Spanish giants had reached an agreement to sign the 20-year-old in a deal worth €20m.

Now it’s reported by Calciomercato that AC Milan will not contest their push to sign him, as they have used their transfer budget to secure Lucas Paqueta in a €35m deal in January and have in turn reportedly informed the player’s agent that they will not be making an offer for him.

That seemingly leaves a clear path for Real Madrid to proceed and sign the midfield star, who has continued to impress for River Plate this season with a goal and two assists in eight league appearances.

Coupled with the fact that he has already earned two caps for Argentina, there is real excitement over his future and the player he could potentially develop into being.

Time will tell if he lives up to those expectations, but Madrid have seemingly seen enough to be convinced that he’s an investment worth making and he could certainly offer a long-term solution in midfield.

It’s been a difficult season for the reigning European champions thus far, but with interim boss Santiago Solari turning things around since he was appointed as Julen Lopetegui’s successor, he will be delighted to see new faces arrive next year, provided he’s still in charge.

Palacios is certainly one to watch as interest from Madrid and Milan in itself is enough to suggest that he’s a talented young player, and it looks likely that he’ll be plying his trade in Spain next year.