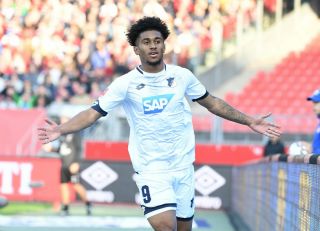 Arsenal loanee Reiss Nelson continued his fine form for Hoffenheim with a goal in their 2-1 win over Augsburg on Saturday.

Just minutes after coming off the bench, the 18-year-old struck the winning goal to seal all three points as he continues to impress on his loan spell.

That’s now six goals in seven Bundesliga appearances for the talented youngster, and his form is certainly not going unnoticed by the Arsenal faithful, as seen in the tweets below as they lavished him with praise.

It does raise a talking point though as to whether or not the Gunners should recall him in January, especially after Danny Welbeck’s injury setback in the Europa League in midweek.

On one hand, Nelson is proving that he could make a positive impact under Unai Emery if given an opportunity as his confidence will be sky high given the impact he is making for Hoffenheim.

However, the opposing argument would be that he’s gaining experience, improving and developing as a player and has no pressure on his shoulders. Perhaps the most sensible strategy would be to allow him to spend the entire season in Germany and continue to make progress.

It remains to be seen if a decision is taken in the coming months to take him back to Arsenal, but there is no doubt that he is proving that he has a very bright future ahead of him if he can continue to display this level of consistency and decisiveness.

Reiss Nelson scored just after 3 minutes being on the pitch. Reminder that he has more goals than Lewandowski in the Bundesliga. Return him in January or we riot @Arsenal

Another weekend, another Reiss Nelson goal. Another winner. People talk so much about Jadon Sancho and rightly so, but Reiss is right up there for me. 6 Bundesliga goals and he doesn’t even start always. Hoffenheim fans absolutely love him. What a player he is going to be. pic.twitter.com/9IInxkYX1f

A goal every 54minutes, only behind Paco Alcacer in goals per minute(minimum 4goals).
Two goals behind Budesliga’s Top scorer.
18 yo Reiss Nelson.

Fucking hell reiss nelson is on ??

Reiss Nelson smashing it on loan ?

Bro Reiss Nelson could have had another goal and was robbed of an assist twice at the end of the game too. He was only on for about 12 minutes.