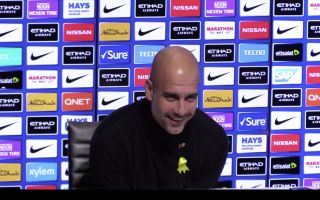 Manchester City manager Pep Guardiola had a hilarious response to claims from Paris Saint-Germain full-back Dani Alves that playing under the Spaniard was ‘better than sex’.

Dani Alves is clearly grateful for the impact the current City boss had on his career whilst managing Barcelona from 2008-2012.

Guardiola’s Barcelona side dominated Spain and Europe and the pair won three La Liga titles and two Champions League trophies during their time together.

Alves also established himself as one of the best right backs ever under the Spaniard’s tutelage.

Pep Guardiola's got his priorities straight, Dani Alves on the other hand… pic.twitter.com/mswxSNoHjz

Guardiola’s hilarious response went viral yesterday and fans were excited to see the humorous side to Guardiola.