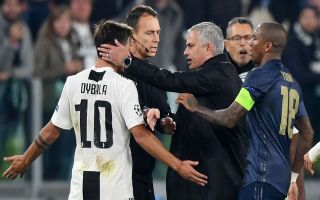 After gesturing to the Juventus fans after Man Utd’s win in Turin on Wednesday night, Jose Mourinho and Paulo Dybala were seen having an animated conversation on the pitch.

The Portuguese tactician sparked debate after he cupped his ear to the home faithful following United’s dramatic late turnaround after he revealed he did so in response to receiving abuse throughout the game.

Evidently, it wasn’t appreciated by the Juventus players as they feared it would incite their fans, with Leonardo Bonucci and Dybala seen talking to him after the whistle.

However, the Argentine forward has now revealed what he said to Mourinho and dismissed any reports that he insulted the Man Utd boss as he merely advised him that he shouldn’t have done what he did.

“I just told him that there was no need to make that gesture,” he told Sky Sport Italia.

“I told him there was no need, I didn’t insult him. I just told him that and left.”

It’s an interesting debate as Mourinho didn’t insult or do anything particularly distasteful in his response, and so after putting up with the chants for 90 minutes it could be argued that he should be allowed to react in that way after his side got the three points.

However, looking at it from the other angle and what he could have done in terms of antagonising the Juventus fans, it perhaps wasn’t the smartest thing either. Nevertheless, it’s unlikely that Dybala’s advice is going to have too much influence on his future actions.