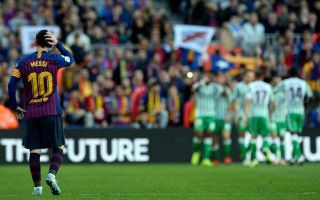 Barcelona lost a La Liga home game against Real Betis this evening for the first time since 1998, ending an incredible 20-year unbeaten run.

The Catalan giants had a bad day at the office, losing 4-3 to a hugely impressive Betis side who exposed their weaknesses in defence time and time again.

Lionel Messi scored twice in the defeat, but even his magic wasn’t enough today for Ernesto Valverde’s side, who remain fairly comfortable at the top of La Liga.

Still, many fans will question if this team really looks good enough in every area as they go through what looks to be something of a transitional period after losing hugely important experienced players in recent years, as Xavi, Dani Alves, Javier Mascherano and Andres Iniesta have all left in quick succession.

Barcelona would certainly not expect to be conceding four goals in a home game too often, and as the stat from WhoScored shows, they don’t lose to teams like Betis in home games too often either.

Barcelona 3-4 Real Betis FT: Betis have won a league game at Camp Nou for the first time since 1998 https://t.co/zdHyjs1UK5 #BarcaBetis

The Nou Camp will have been stunned by what they saw today, and it looks like potentially worrying times ahead for this team.