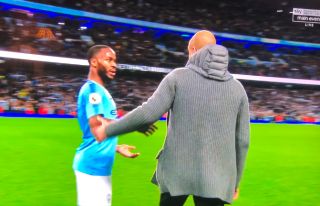 Manchester City manager Pep Guardiola was pictured at the end of the Manchester United game appearing to tell off Raheem Sterling.

Video from City’s official Twitter account also shows what looks like a quite heated exchange between the pair, with Sterling looking a little taken aback by his manager’s anger.

A number of users on Twitter think this was the Spanish tactician reprimanding the England international for some show-boating late on in the game.

After this sequence of play, the final whistle blew and Pep had a go at Sterling for showboating. Guardiola is the complete perfectionist and is a true innovator. Scintillating football. pic.twitter.com/UoQavYT8nG

City won 3-1 against rivals United, and were comfortable for much of the match as they outplayed their opponents throughout.

Sterling was clearly enjoying himself and taunted the United defence with some trickery and skill late on, which is not exactly the way to win friends and admiration.

Fans are sure Guardiola wouldn’t have appreciated it, so is this why he went over to speak to Sterling afterwards?

Class from Pep bollocking Sterling for pissing about #whataman

Pep going straight to have a word with Sterling, possibly about his little step-overs and showboating in the final seconds #ManchesterDerby #MCFC pic.twitter.com/8oGOKjQi7Q

Raheem Sterling just got a bollocking from Pep for showboating at the end ?

Sterling deffo getting whipped into submission by Pep later on

Wonder what did pep tell sterling after the whistle. Surely its something about his behaviour at the end of the game.

Love Pep having a pop at Sterling for Showboating #levels