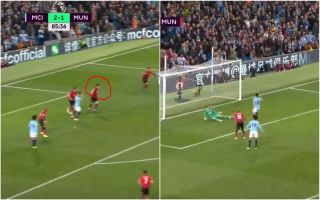 Manchester City made it 3-1 in today’s derby clash against Manchester United thanks to a superb passing move finished off by Ilkay Gundogan.

You can watch the Gundogan goal video below, but also watch the exchange between United defender Victor Lindelof and midfielder Nemanja Matic.

Lindelof tries several times to point out the danger of Gundogan’s run, including moments before he scored the crucial third goal.

The Swede can be seen gesturing for Matic to keep an eye on the German midfielder in the box, but he completely ignores this advice, allowing him acres of space to eventually find the back of the net.

Some fine passing by City, but not good enough from United defensively at all, and from one of their most experienced players…