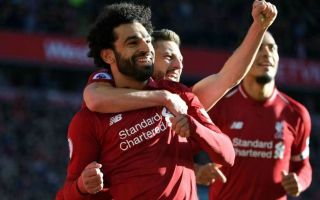 Liverpool goalkeeper Alisson is earning a huge amount of praise for his role in the Mohamed Salah goal vs Fulham this afternoon.

The Brazil international joined the Reds from Roma this summer and has quickly shown why there was so much hype about his move to Anfield.

As well as some smart shot stopping and a good command of his area, Alisson has shown himself to be a very capable passer of the ball out from the back.

As this is an increasing trend in the modern game, Alisson seems the perfect fit for Liverpool right now and the way that they play under Jurgen Klopp. Still, it’s quite surreal to see a ‘keeper become such an important part of a team’s passing play and starting so many moves that seem to lead to goals.

The 26-year-old started the move that led to Salah’s goal today, showing quick thinking to pass the ball out after Fulham had a goal disallowed themselves.

This enabled Trent Alexander-Arnold to burst into space and play the ball through to Salah, with the Egyptian then making no mistake after bearing down on goal.

Twitter is full of praise from fans for Alisson’s role in this goal, as well as from Liverpool Echo writer James Pearce!

What a counter-attack that was. Brilliant quick-thinking from Alisson and a lovely delivery from Trent AA to send Salah scampering clear. Liverpool far from their best but in front at Anfield #LFC

That goal all stems from Alisson’s quick pass to Trent to catch Fulham before they were set.

Quick thinking from Alisson to get Liverpool playing, then a fine pass from Alexander-Arnold to release Salah. Finish was as we've come to expect. #LFC

That counter goal shows why Alisson is the best keeper in the league! #LIVFUL

We’ve not been great again but we have the lead. Brilliant quick thinking from Alisson and a quality pass from Trent to set Salah away.

Great awareness from Alisson and excellent pass from TAA!

Fulham players caught offside.. and instant play by Alisson for Trent.. passed to Salah and BOOM!!