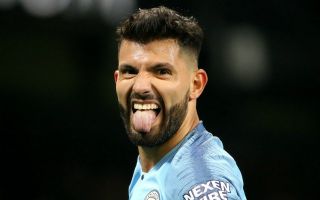 The Argentina international netted his eighth goal against Manchester United today in a 3-1 victory at the Etihad Stadium, going level with Red Devils legend Wayne Rooney.

There’s no question Aguero has been one of City’s best players ever since he joined the club in the 2011/12 season, as he’s gone on to help the team win three Premier League titles and other major honours.

The 30-year-old now has a total of 209 goals in 306 appearances for City, and it is his ability to find the back of the net in big games like this that also make him a hero amongst the club’s fans.

Aguero’s quality was there for all to see this evening as he slammed the ball past United goalkeeper David de Gea this evening to make the scoreline 2-0 at that point in the game.

Although Anthony Martial pulled one back from the penalty spot, City scored again through Ilkay Gundogan to cement a 3-1 victory.

And while it is the team that matters most, this is certainly an impressive record from Aguero considering all the great players who’ve featured in this fixture in the Premier League era.