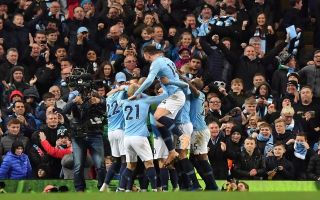 One of Manchester City’s most popular stars had a hilarious response to a fan who questioned his defensive abilities after City defeated Manchester United 3-1 in this evening’s mouth-watering clash.

Fans had thought that Mendy would be exposed by some of United’s attacking stars in today’s game but the Frenchman rose to the occasion and nullified the threats that United pose from the wide areas.

Anyone who is familiar with Mendy will know that the 24-year-old is quite an eccentric character and given Mendy’s nature he was never going to take the criticism towards him lightly.

The former Monaco man fired back a hilarious response to the fan, check it out below:

Did u even watch the game? Lol https://t.co/sQNMJIuMe5

Pep Guardiola’s side proved to be too good for Jose Mourinho United side this evening, City dominated United throughout the entire game with a whopping 65% possession.

City have been regarded as a top-heavy side under Guardiola but defensively they were very sound today. City managed to limit United to only 1 shot on target for the entire game.

If Serie A doesn’t suit your fancy you can check out Celta Vigo vs Real Madrid. Los Blancos are hoping to get their season back on track under new manager Santiago Solari after a disastrous start. Click here to find out how you can watch Gareth Bale and company in action either online or through the comfort of your TV.