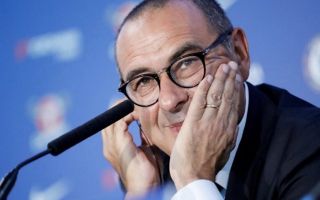 Maurizio Sarri became the first manager ever to go his first 12 Premier League games unbeaten on Sunday as Chelsea were held to a 0-0 draw by Everton at Stamford Bridge.

The Blues had numerous good chances to score during the match, however they failed to convert any of them as they dropped more points in the title race.

Nevertheless, the draw now means that Sarri is the only manager in history to go without loss in his first 12 games in charge of a Premier League club.

The west London side have been very impressive so far this season, only dropping six points in their first 12 league outings.

RECORD: Maurizio Sarri is the first ever manager to go unbeaten in his first 12 games in the Premier League.

The Blues are also the only club in Europe’s top 5 leagues that are yet to taste defeat in all competitions this year, another thing that Chelsea fans can take home as a positive following today’s draw against the Toffees.

Sarri has managed to get his side playing some fine football so far this season, however they are going to have to start taking their chances in games like today’s against Everton if they are to push both Liverpool and Man City all the way this year.

However, Sarri has still take some solace from today’s game, knowing that he has set another record in his first few months in English football.

Very impressive to say the least…