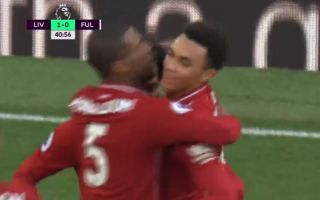 Mohamed Salah has given Liverpool a 1-0 lead against Fulham in this afternoon’s Premier League clash in a brutal 13 seconds for the visitors.

Fulham thought they’d gone 1-0 up after having a goal disallowed at the Kop end, only for Liverpool to break quickly and catch their opponents asleep as Salah pounced to score the opener.

Things really do seem to be going Liverpool’s way this season as they chase the Premier League title and look like having their best shot at the trophy for a long time.

They’ll need clinical play like this, with Fulham simply having no answer for the speed of their play or the accuracy and composure of Salah’s finishing…