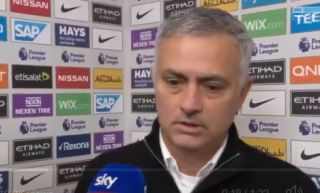 The Portuguese tactician expressed the view that United suffered from playing two difficult away games before their trip to the Etihad Stadium today.

The Red Devils were made to work for an impressive 2-1 win away to Juventus in the Champions League before taking on City, who, by contrast, strolled to victory in their home game against Shakhtar Donetsk.

Mourinho said he made this clear to his players before even attending his post-match media duties.

United fans may have some sympathy for their manager here, though in fairness the fixture list is what it is and affects everybody.

On top of that, while there is no shame in losing to a top side like City, it should be a concern that the team managed only one shot on target – Anthony Martial’s penalty – in the entire game today.